jake
/
cloudflare-ufw-updater
mirror of https://github.com/jakejarvis/cloudflare-ufw-updater.git
Fork 0
Code Releases Activity
🔥 🧱 UFW rule updater to only allow HTTP and HTTPS traffic from Cloudflare IP address ranges
securitybashcloudflarefirewalllinuxshellubuntuufw
You can not select more than 25 topics Topics must start with a letter or number, can include dashes ('-') and can be up to 35 characters long.
2 Commits
1 Branch
0 Tags
26 KiB
Shell 100%
Branch: master
master
Branches Tags
${ item.name }
Create tag ${ searchTerm }
Create branch ${ searchTerm }
from 'master'
${ noResults }

A simple bash script that downloads a list of IP address ranges (both v4 and v6) belonging to Cloudflare and adds them as rules to UFW (Ubuntu's Uncomplicated Firewall).

In other words, the easiest way to protect your origin server from direct attacks circumventing Cloudflare's protection.

Make sure you're allowing SSH traffic for yourself before enabling UFW! Run sudo ufw allow ssh to be "safe" — you can restrict SSH to your own IPs later if you'd like to actually be safe. 😉

Download (and skim through it — don't trust strangers on the internet with sudo permissions!) and run this script once as root (sudo bash ./cf-ufw.sh).

Once you've checked that it worked (sudo ufw status numbered once again), you can run sudo ufw enable to lock everything down. 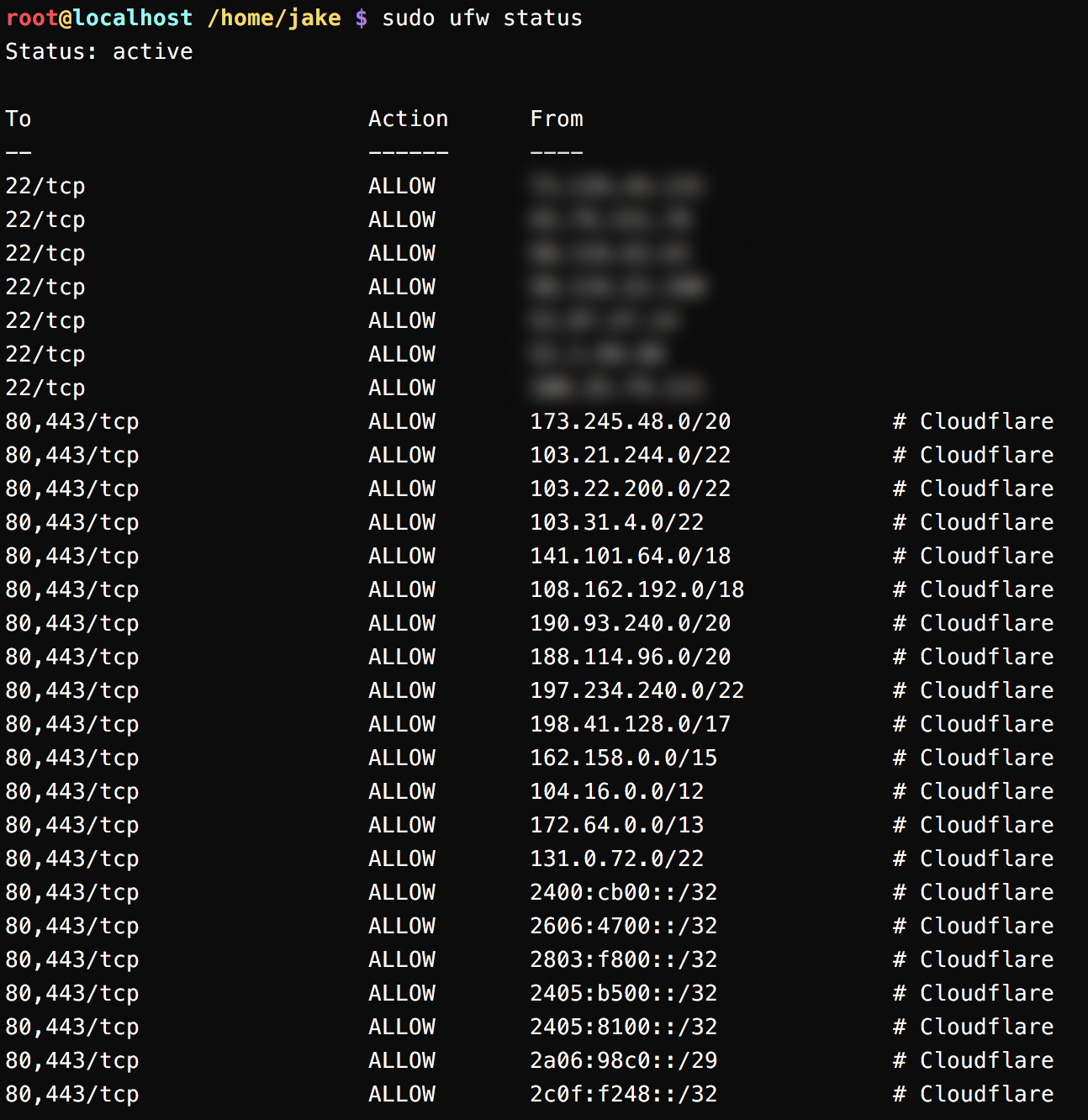 Run as a daily cron job:

Cloudflare might add new IPs to their lists at any time. Therefore, it's important to keep your UFW rules up-to-date by running this script automatically at a set interval via a cron job.

If you'd like an interval other than daily, crontab.guru is a nifty tool to generate the syntax to replace @daily.

cf-ufw.sh can easily be modified and adjusted to your liking. By default, it only restricts ports 80 and 443 via TCP — likely the reason you're using Cloudflare in the first place. Those can be changed to any other port number (or literally every port). You can also remove either one of the first two lines if your server isn't using IPv6 or IPv4.

In any case, I'd recommend skimming Ubuntu's full UFW documentation before enabling, as it's easy to lock yourself out of your own server if you're not careful!

This project is distributed under the MIT license.